A Cheerful End to a Stressful Day

Phew!!! The worst part of monthend is pretty much over (it is manic at work), and although I had planned on leaving work on time yesterday, due to a few issues that arose I ended up getting home almost two hours late, which meant that the boys got to bed before I got home. To be fair, this isn't always a bad thing :o)

My oldest boy, Christopher, had been waiting patiently and checking the post box each day as he was waiting for his black Finsbury to arrive from the king of Philofaxy himself, Steve. So my first question was to ask Ben if Christopher's parcel had arrived, and it had. Ben was under strict instructions that I wasn't to look at it until the morning, bless him. However, the initial response had me a bit confused "Yes, there's a parcel for you as well...", who could be sending me a parcel?

Then I saw the name on the parcel "Micheline", how on earth could I have forgotten that the rather pink looking Winchester was on it's way to me? I have to say, for an old girl, she is looking mighty fine. Way more refined that some of these flibberty-gibbets who try to flaunt themselves at every available opportunity (yes Temperley's I'm talking about you).

In the pictures that I had seen of her she looked like she (yes, she is definitely a she) may be quite hard, and she is quite sturdy, but still feels very supple and strokeable, like any female should. She even felt kind of warm, hence I ended up cuddling her for quite a while - she is just such a love, and straight away feels like an old friend.

Anyway, I beginning to weird myself out now, so time for some pics )obviously none of the actual unwrapping, because I couldn't wait :o)


I think you will agree, I have just got myself a bit of a legend - she may be my first Filofax to receive a proper name.

This morning I was very privileged, when Christopher came downstairs and showed me his new filofax. He is very impressed with his personal sized Finsbury. He was also very impressed by Steve's Philofaxy business cards, and he shared them, he said that Marcus and I could both have some and he shared them out amongst the three of us, giving three to me, four to Marcus and keeping four for himself (including one that was larger than the rest with smaller writing on it which he'd noticed straight away). I am so proud of my boy that he shared them all - he can be such a sweetie. Before I left for work I was on a bit of a mission to dig him out some inserts, and found a complete set of 2013 WO2P inserts and full divider sets for him to put in. As I handed them to him he said "All of those?" as if he thought I would just give him a few pages to go in, and then went off to the dining table with Marcus to help him open his Filofax properly so he wouldn't damage the rings (there was no way Christopher was going to put those inserts down to allow him to have both hands free). Tonight both boys have gone to bed, Filofaxes in hand, and put them on the table between their two beds - so cute :o) 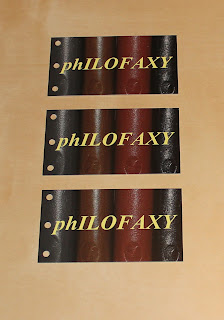