OK - it says in brief, but what it actually means is that I just don't have time to do lots of separate posts, and I'm lazy. As some of the items get used more I will post about what I have done with them  :-)

As you may know, I put myself on a no shopping stint for 12 weeks, did I save money? Probably not, because since then I have probably bought all the stuff I would have bought in the course of that 12 weeks anyway - yay!!!

These are the lovely things that were waiting for me when I got to Weymouth:

A lovely personal Malden in Ochre from the fabulous Charlotte, who included some filofax stickers (which are great), and some diddy post-it style page markers (which are always so handy when you're trying to actually be organised). I now have almost a full Ochre Malden set - I'm only missing the mini, and I don't think I want one of those, they don't appear to have enough pockets...


The other thing that I got with these which I've never had before (or even considered) is the 2DPP diary. I think I may have to start doing a one line gratitude journal and then I can pretty each day up with stickers, doodles and washi tape. I think this would be perfect for in my happiness binder :-)

My next package was my beautiful teal Plannerisms planner, I haven't put in loads of photos, but if you haven't seen the insides of these before check out this link to the Plannerisms blog of Laurie who designed them - they are amazing.

I was so pleased to get this and was going to start using it the first night, until someone (thanks Dave) thought they should tell me that I shouldn't write in here with a normal BIC biro, it needed a special pen, not just a black biro... so much for starting my organisation and new set up immediately.

Next came the cute washi tape that I spied over on Alice's blog (The Wonderful Life of Alice), I'd mentioned that it was I thought it was great, and as she didn't want it anymore she sent it to me. How sweet is this personal notepaper that Alice uses - I want!!!

But not only did Alice send the washi tape, she also included a bag with loads of bits and pieces for me (and my boys).  There is a picture of a lot of the stuff that arrived below, but there was even more than this. In the evening of the day that I received this I met a friends niece who was just fabulous and she loves stickers too (and yes, she is an adult too - see, it's not just me), as she was so nice and loves stickers sooooo much I did her a little pile of various stickers out of the ones Alice had sent me. I got a message the next day (I left them for her, so she didn't get them until the morning) saying that she was very pleased with them. I am glad to have been able to share my gifts from Alice with someone else who really appreciates them too.

Then came the pens - a pack of 20 Staedtler Triplus Fineliners, and check out the packet these come in, that is amazing. I happened to mention that I like my pens to stay in the correct order in the holder, and then got paranoid realised that if I left them in the meeting room without me then they would very quickly be rearranged by the mean boys, therefore every time I left the room (regardless of what for) my new pens had to come with me.

On my last day in Weymouth my final package arrived - 6 new washi tapes from eBay, I only have one problem now... 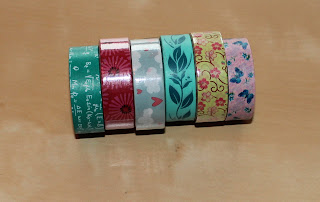 After work on Friday I was dropped at Staples in Bournemouth, as I wanted to get some BIC medium crystal biros (???) and I was desperate to check out the ARC system that I have read so much about. I really liked the paper (nice quality, reasonably priced) and so cam out of there with the system, spare paper and a pack of 3 hotlist type pads - result!!! 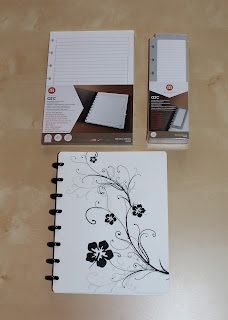 Saturday in Bournemouth... where to go?...

Paperchase of course!!! Unfortunately (or fortunately maybe) the Paperchase concession in Bournemouth is only small so I didn't buy a huge stack of things, but managed to pick up a few good bargains.

I also went into TK Maxx (had to be done) and although they had some lovely notepads there, they didn't have anything that I really wanted desperately (or at least nothing that I would have actually been able to get home anyway). However, one thing they did have which I hadn't expected were a few packs of the standard block colours of scrapbooking paper from American Crafts. If I'd had any chance of those fitting in my case I would definitely have got some.

And then on Friday this week while I was working from home as I was too poorly to be allowed out of the house, this arrived from Maaike of the wonderful blog My Filo World.  Now this is the only one with proper unveiling photos as I didn't have a camera with me for any of the others, so lets see...

And here it is.. the gorgeous, green Windsor

Inside there was also a special today style marker, Month on 2 page tabbed dividers, and some funky paperclips (heart, star and a particularly cool circular one). 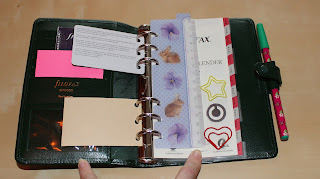