As much as some people believe that my DF must hate my stationery obsession, he really doesn't. This was evidenced the other week by the fact that he spied Office World when he was in Wettingen at the fitness shop, and texted me immediately to let me know :o)

Obviously, the first thing I did was to take a look on-line as I was nowhere near Wettingen at the time, and then this weekend, being the absolute star that he is - he took me to Wettingen so I could go in and have a good look.

I can safely say that I will be going there again, they have lots of pretty things, paper, pens, various storage solutions (including a fab box with compartments that I could use for scrapbooking supplies - brads and stuff).

After a good browse by all of us (even DF... the boys are always happy to look at pens if they think they'll get one - they chose a shark pencil sharpener and a Stabilo pen 68 each).

DF spotted the first purchase... he has told me so much about these pens before as he used to use them when he worked in a technical drawing office, and has recommended that I try them before as I just don't get on with fountain pens. I wasn't sure about them for myself as they have such skinny nibs (in this set 0.5, 0.35 and 0.25), but I think he kinda misses them. When he spotted these I figured that we just had to get them (even though he generally used a 0.1 nib).

Next to the Rotring pens there were the Rotring "curvy ruler things" (which I was told is NOT the correct name - ha ha ha!!!) I'm sure I had some similar to this when I was little and am sure they will come in very handy for scrapbooking, journalling and any other number of crafty projects.

But obviously I couldn't resist *all* the pretty things... I got the post-it index tabs with the little arrow heads on them, which I am looking forward to using as I know exactly what I want to use them for (as opposed to buying them and then either trying to find a use for them, or wanting to just keep them 'for best'...

And then I saw these two sets of Japanese stickers - they are super cute, but not particularly small. Perfect for decorating dividers though :o) 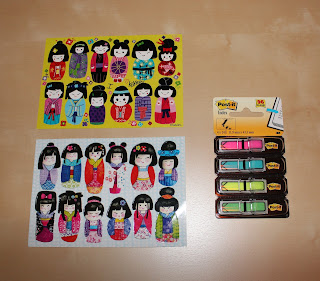 And the other thing they stock (which I haven't found anywhere else over here yet)? MT washi tape!!!

I resisted for now as they are mainly plain ones and I have quite a few patterned ones already, but if I need some plain as well, then I know exactly where to go :o)